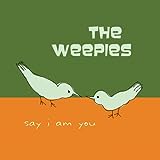 I confess. I’m addicted to The Weepies. I just bought their latest album, Say I Am You, on eMusic.com and can’t stop listening to it.

The group is fronted by singer-songwriter duo Deb Talan and Steve Tannen. They have a rustic folky sound that is in some places poppy but in other places pretty mellow. Their lyrics are playful, yet deeply poetic, and Deb’s beautiful alto voice (that has elsewhere been compared to Karen Carpenter’s) and Steve’s perfect harmonies give the album a rich character.

I first heard The Weepies in an NPR interview (click “Listen” just under the article title to hear the interview). Their personalities and their history together struck me as much as their music did, which prompted me to buy their album. I’m not a huge fan of the folk genre, but I pride myself in my eclectic taste in music, so it was inevitable that I would find some folk music I can really enjoy.

I’m pretty stingy with my five star ratings in iTunes. Most songs I like are marked three stars, the best songs are marked four stars, and I save five stars for those songs that are simply amazing. That said, I’ve marked no less than six songs on this album with five stars: “Take It From Me”, “Gotta Have You”, “World Spins Madly On”, “Painting By Chagall”, “Nobody Knows Me At All”, and “Living in Twilight”.

In short, buy this album. If you’re anything like me, you will not regret it.

One thought on “The Weepies”